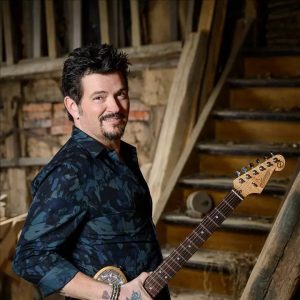 He may be one of the most lauded artists in the contemporary blues arena today, and rightfully so, but for Mike Zito, the thing that counts the most is maintaining his honesty, authenticity and integrity. Those are the qualities that have steered Zito’s career since the beginning and continue to define every effort he’s offered since.

Mike Zito, Winner of the 2018 Blues Rock Artist of the Year at the 39th Annual Blues Music Awards serves as the band leader and front man of this 8 piece Big Blues Band Show featuring a special Rock-n-Roll Tribute to Chuck Berry plus Zito’s original music with a sensational brass section.

For 12 years, Eric Demmer was the saxophonist for B.B. King, and prior to that, for Clarence Goutemouth Brown.  Similarly, trumpeter James Boulet also played for many years in the B.B. King band. The second guitarist in this all-star lineup will be the legendary Tom Holland, former guitarist of the late harmonica legend James Cotton.  With Mike’s original rhythm section of drummer Matthew Johnson, award winning bass guitarist Terry Dry and Freddie King’s former keyboardist Lewis Stephens also joining the band, it just doesn’t get any better to create that Big Blues Band sound and a spectacular show.

“FROM THE DOME, INTO YOUR HOME”

Live stream ticket, hosted right here on Stargazers Live. If you cant make the show, or would rather watch from home, you can purchase a Live Stream Ticket .Watch your favourite artists from the comfort of your own home.

In-Person attended live concert tickets! Get the absolute best concert experience, live from under the dome. Head on over to stargazerstheatre.com to pick up your tickets!

* these tickets are available in limited numbers due to health department guidelines. get them before we are sold out! *